Vincent Simmons, 85188, is temporarily housed at the Elayn Hunt Correctional Center  because the Louisiana State Penitentiary (LSP) has been evacuated partially since May 9, 2011, due to the (potential) flooding along the Mississippi River. To locate a LSP inmate by phone, please call 225-383-4580.

(c) Patrick Semansky, The Associated Press, A camp at the LSP alongside an inner levee on May 9, 2011

the Louisiana State Prison (Angola). Twelve miles of levees ranging from 68 feet (20,73 m) to 72 feet (21,95 m) high surround the 18,000 acres prison ground (comparable in size with Manhattan) of seven formerly consolidated plantations. There are patrols around the clock at Angola. Some inmates remain there to provide support for the facility explains the website of the Louisiana Department of Corrections (DOC).

Since Hurricane Katrina and other natural disasters, the Louisiana DOC has some practice in transporting large groups of inmates from one facility to another. But the state’s oldest and only maximum security prison “Angola” with a population of 5,108 detainees has never been evacuated before. It is a historical event and something new to all parties.

The Louisiana Department of Corrections  informs: 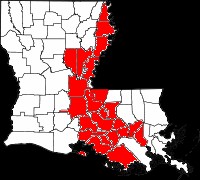