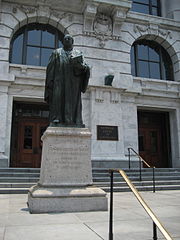 The U.S. Supreme Court’s ruling of June 25, 2012, in Miller v. Alabama entitles juveniles serving a mandatory life term without the possibility of parole to be granted a new sentencing hearing.

“Held: The Eighth Amendment forbids a sentencing scheme that mandates life in prison without possibility of parole for juvenile homicide offenders. Pp. 6−27.”

Christi Lynn Cheramie, now in her 30s and a model prisoner, was 16 years old when she pleaded guilty to second degree murder in Avoyelles Parish.

This might interest you as well: How Germany does Prison – Americans on a mind-boggling incarceration road trip. (from June 16th through June 21st 2015)